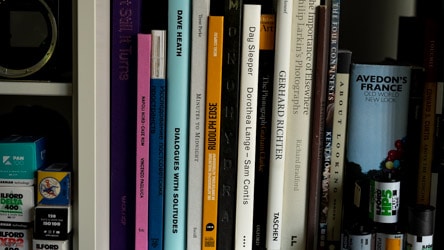 There are endless guides on the practical aspects of photography, and very few that teach you how to actually take good photos. Film as a photographic medium is not meant to capture perfect, sharp, results. It’s a medium that tends to be subtler and more forgiving. A bad digital photo can be incredible on film. But since it’s a physical, chemical process, every single photographer is going to make something completely unique to them.

“If you’re doing the whole thing, shooting your photo, developing your film yourself, and maybe even printing it in the darkroom, then it’s your craft, it’s your product, you are actually creating it with your hands,” Birgit Buchart, the General Manager of Lomography USA told LearnFilm.Photography. “You’re also working with a medium that reacts to light just as much as temperature and other influences of the outside world. And that makes it more artsy and crafty than a file on your computer that might just lose resolution over time.”

Every photographer out there will have a unique way of making their photographs. Photography isn’t just about taking photos. It’s also how to develop the negatives, how to print the images, and how to bring them all together in a single piece of art.

This work is complicated and enormously difficult to do. And if you’d like to make a life, or even a hobby out of it, the best places to look are to the masters. This is a collection of the latest photo books that have changed the way I look at photography. Most of them are in Black and White and contain images from the past. But all of these are extremely personal, and introspective art that tells something unique about the world we inhabit.

Dorothea Lange is the famous photographer who took the Migrant Mother photograph. Her works helped sway public opinion to help the immigrants starting their lives in America. Many of them lived in squalor, or put in backbreaking labour just to put some food on the table. Her work helped the Federal Government’s Farm Security Administration lift people out of poverty.

Since her days with the FSA, she amassed a major collection of images before her death in 1965, most of which are stored to this day in the Dorothea Lange Archive at the Oakland Museum of California.

Day Sleeper is filled with Lange’s works brilliantly pulled together by American photographer Sam Contis. In her enormous efforts sifting through a lifetime’s worth of negatives, Contis said she “was struck by her interest in gestures, and in the fragments of bodies, and by the multiple ways she found to convey intimacy … I was particularly drawn to a leitmotif that I noticed reappearing throughout the archive. Time and again, across the decades, she photographs people sleeping — especially during the day.”

The book characterizes Lange’s everyday life in California. It’s chock full of low-contrast, deliberate, and carefully-composed scenes. Every photograph has a purpose, from the hand portraits to the imagery of day sleepers. Each page has something to discover, and the book is a breathtaking example of how to say something meaningful out of ordinary, everyday life.

Hengki Koentjoro is a brilliant Indonesian photographer who captures incredible black and white photographs. His book Monohydra is one of the most brilliant pieces of artwork I’ve come across in the past three years. The book is filled to the brim with underwater compositions taken on film.

His high-contrast style perfectly captures the often scattered, illusory light found down below, creating scenes that are at once eerie, and full of life. Koentjoro brilliantly uses negative space to draw the viewer directly into his often centered compositions, showing a kind of life that’s unimaginable on the surface.

It’s extremely evident that Koentjoro takes incredible care with every single image in the collection. And his images of fish, coral, and jellyfish are so mesmerizing that this is an easy book to spend an entire day pouring over.

It’s black finish is a little too easy to mark up, so take care if you like to keep it in perfect, resellable condition — because of the quality work, and unique nature of the photography, this is one that’s for sure going to hold its value over time. All I can say is keep looking out for Monohydra, or any work by this author.

Trent Parke’s Minutes to Midnight is the photobook Hunter S. Thompson would’ve made if he were just sober enough to hold a camera steady. The book is filled with scenes of debauchery and chaos captured on a 90,000km road trip across Australia.

Parke works for Magnum Photos, which produce a number of iconic volumes of work, including books of their contact sheets. These books are excellent for new photographers, as it shows all the images the photographers take, including a ton of unseen photos and their process of getting those money making shots.

Minutes to Midnight has been described as capturing the anxiety of a changing Australia. It features portraits, street photography, and landscapes taken at night through Parke’s extreme-high-contrast style. This photographer uses long exposures, and blown-out highlights to show outlined figures in a frantically god-like state. The scenes in the book will change the way you look at Black and White imagery, and the way you shoot film.

I can’t recommend this book enough. When a friend of mine recommended it, I couldn’t believe that there were books out there like this. It’s one of those books that doesn’t have to rely on using baseless nudity to claim art. But it shows a wretched, chaotic vision of a world that reflects the author as much as the setting in which he lives.

Trent Parke’s Minutes to Midnight, and any of his other works are absolutely worth checking out and holding onto.

One of the first photo books I ever picked up, and actually one of the books that really pushed me back into film was Rudolph Edse: An Unintentional Biography by Quebec photographer Michel Campeau.

I first saw the work at the McCord Museum in Montreal, which features a number of renowned local and international artists. It’s a fantastic museum that’s always worth checking out if you’re in the area. The Unintentional Biography of Rudolph Edse is a striking exhibit that shows the daily life and tinkering of a typical middle-class American family. Edse was a scientist working on rocket fuels at Wright Field in Ohio, and an avid photographer. Campeau came across the negatives at a yard sale and was struck by their beauty and familiarity.

The portraits in the book celebrate American life by documenting traditions, road trips, and just some parts of daily life. The images are all expertly lit and meticulously sharp — as only a scientific mind is willing and capable of achieving.

Michel Campeau’s book, Rudolph Edse: An Unintentional Biography is full of nostalgia and life in the American midwest, and is a truly fascinating book to look through. The images are aspirational, and serve as a perfect mood board for anyone looking to learn about lighting, color theory, and documenting nostalgia. The book is labelled as French, but is written in both English and French Languages.

American street photographer Dave Heath has a way of making even a kiss feel like a solemn venture. There are only two smiles in the entire book, Dialogues with Solitude. The rest of it is a dark rumination of America during the Korean War. And fair enough, Heath, himself grew up as an orphan from the age of 4, and was drafted into the Korean war, where he took some of the photographs that appear in this book.

The rest of the images were taken in public squares in Eastern USA. Heath characteristically fills the frame with his distant subjects, many of whom are unaware their photo is being taken. The images all show somber, distant, and detached expressions burnt deeply into the photo paper. The images are all dark in both appearance and form, with the pessimistic expressions barely standing out against the dark, black background.

Heath was an exceptional photographer and instructor, having taught at some of the most prestigious universities in Philadelphia, Ohio, and at Ryerson University in Toronto. This work has been posthumously published as part of a world-wide exhibition called Multitude, Solitude that started in France, and included The Photographers’ Gallery in London, MoMa, Philadelphia Museum of Art, and the National Gallery of Canada.

Dave Heath’s Dialogues with Solitude is one of those once-in-a-lifetime pieces of art — a breathtaking rumination on the beauty of sadness. And it’s one of those works that every photographer can learn, and take something from. Nobody captures life the way Heath did. If you have a chance to pick this up, I guarantee you won’t regret it.