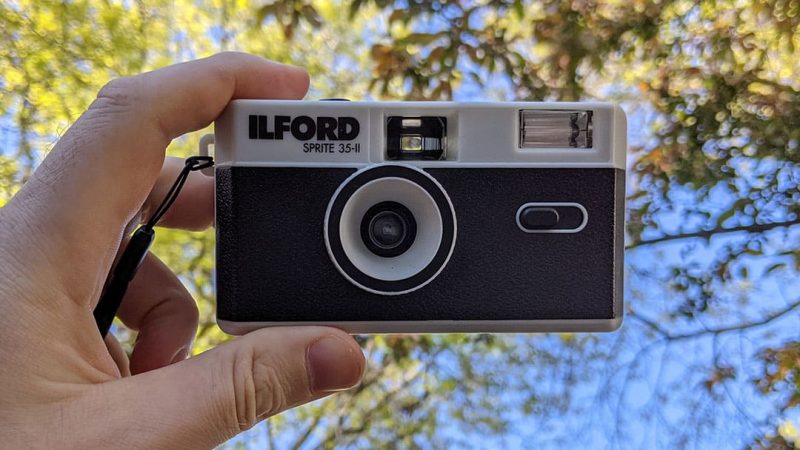 Ilford’s new Sprite 35-II camera is going to be the most fun camera in your collection. If you haven’t seen these yet, they’re essentially everything you know and love about disposable cameras, but in a reusable, 35mm format.

The Sprite II is a beautiful, retro redesign of the Harman Reusable Camera. Other than the exterior, this camera is exactly the same. It features a fixed-focus 31mm lens, with a 1/120th shutter speed and an f/9 aperture when the flash is off. It weighs just 112 grams and fits easily in a jacket pocket with enough space left over for a couple of rolls of film.

This is an extremely lovable camera that’s built for taking photos of friends, families, and events. Whether it is the simplicity or the look of this camera, something about it makes it capture more smiles than any other camera in my collection. After shooting a couple of rolls through this camera, and its not-so-identical twin, the Harman Reusable Camera, I’ve come to learn a lot about how to get the most out of it.

I’ve also grown to love the simplicity of this camera. Film is an extremely forgiving photographic medium, especially when it comes to over-exposure. While this camera does struggle in low light when the flash is turned off, it’ll never miss a show during the day or evening.

At night, it’s the perfect camera for capturing photos of friends. Simply turn on the flash, and take some cheeky photos when people aren’t expecting it. The photos always turn out exactly how you’d want them to: full of life and vivacity.

Find the Ilford Sprite for the best price on Amazon here.

It’s no secret that the Ilford Sprite 35-II cameras do not capture sharp images. But that’s not what this camera is about.

The corners are completely unsharp while suffering from vignetting, lens flare, chromatic aberration, and dramatic distortion. The center of the frame is a little better, but that’s about where it ends. If you’re capturing landscapes, this camera isn’t going to capture photos that get featured in National Geographic (though, they could probably make it in Vogue!)

Where this camera really shines is in the way it captures human expression and skin. You’ll never need to do skin retouching when using this camera — it does everything for you. People tend to look really good in this camera without needing fancy angles or ring lights.

Does the Ilford Sprite 35 make a good gift for film photographers?

One of the reasons I love the Ilford Sprite so much is because this camera is so easy and fun to use. Many photographers are switching back to film because of how much fun disposable cameras are — they’ve made a real resurgence for weddings and other events for a reason.

The Ilford Sprite 35-II is a camera that many photographers will absolutely fall in love with at first sight. Even if they already have a professional camera, like a Rolleiflex, Hasselblad, or Mamiya RB67, I personally believe every photographer can find room in their hearts for a camera like the Sprite.

That said, even though I am a fan, I know this camera isn’t for everyone. if you know the photographer in your life has an obsession with finding the highest-quality cameras with the best image quality, a camera like this may not be their cup of tea.

What type of film does the Ilford Sprite take?

Because of the fixed shutter speed and aperture, the types of film that can be used are limited. If it gets too dark outside and you have the wrong roll of film, you’re likely to lose a lot of shadow detail if the flash isn’t on.

Ilford recommends using ISO 200 and 400 films with the Ilford Sprite 35-II. ISO 200 is great for full sun, while ISO 400 film works for every scenario, including when taking snapshots at sunset and sunrise, or when taking images at night with the flash on.

This camera looks amazing using color films like Kodak Gold, Ultramax. Their warm, saturated feel looks stunning in this camera, capturing perfect skin tones that look gorgeous at sunsets. ISO 400 film will give you more exposure latitude in the shadows and is preferable when shooting later in the day, or with flash at night.

400-speed B&W films, like Ilford HP5, also perform extremely well in this camera when shooting contrasty scenes. B&W films work best when there is interesting light. So as a general rule, I use color film when taking snapshots of friends, and throw in some HP5 or Kentmere films when out for walks.

A fun experiment that produces surprisingly nice results with this camera is also to use a slower speed film like FP4+ or Kentmere 100, and push the film +2 or +3 stops. Pushing the film this far adds extra grain and contrast, which looks brilliant in a camera like this.

Dark conditions like nighttime, shooting indoors, or even in the forest will require the use of flash to create a proper exposure. While the camera doesn’t advertise this, the aperture actually does get larger when you turn on the flash. That means you can potentially get a brighter exposure by turning on the flash when taking landscape photographs later in the day. But the larger aperture does further decrease the corner sharpness in this camera.

Which films should I avoid using with the Ilford Sprite 35-II?

I don’t recommend using E6 color positive films like Kodak Ektachrome, or Fuji Velvia with a camera like the Ilford Sprite. These film stocks require nearly perfect exposures to create beautiful photographs, and this camera just cannot guarantee a good exposure in every situation.

I also don’t recommend using professional color-negative film stocks like Kodak Portra, Kodak TMax, or Ilford Delta films. While those films will create perfectly exposed images in this camera, you won’t be able to take advantage of the sharpness, color, and exposure flexibility that professionals pay extra for.

The great thing about the Ilford Sprite 35-II is that it comes with a built-in flash. So while you can’t change the settings, you will be able to capture photographs of people at night, or in darker circumstances.

The flash only reaches between 1 and 2.5 meters and drops off very quickly after that. That means when using this camera at night, any distant background will become nearly black. At night, you truly capture the energy in the room when using the flash. Candid photos around the fire, or at parties are incredibly fun and rich.

Part of the reason is that this camera is so simple and unobtrusive — pull it out, turn on the flash, and just click the button. The soft appearance this camera creates makes sure everyone’s skin looks perfect, no matter how intense that flash burst is. That simple fact alone makes the Ilford Sprite 35-II my partner’s favorite camera.

When taking photographs at night, it is not recommended to put higher ISO films in this camera, like Ilford Delta 3200. Even though this film will typically create brighter backgrounds at night, the flash will completely over-expose nearby people in the frame. And those that are far enough to make use of the extra ISO will probably be too small in the frame, anyways.

What battery does the Ilford Sprite 35-II need?

I’ve had these rechargeable batteries last longer than 8 months in the Ilford Sprite 35-II. The flash will make a whining sound when first charging, and lights up a red LED on top of the camera when it is ready to fire.

According to Ilford, It takes 15 seconds for the flash to charge up for a full shot. In practice, I’ve had the flash recycle time take anywhere from 3 to 20 seconds depending on how cold it is outside, and how much juice is left in the battery.

What’s the difference between the Ilford Sprite 35-II and the Harman Reusable Camera?

Kentmere 400 is also no slouch. That B&W budget film creates beautiful results — especially with a camera like this.

Who is this camera for?

The Ilford Sprite II is a camera that’s built for candid photographs. It’s perfect for parties, campfires, vacation snaps, and every other situation that needs a wide-angle camera with a quick trigger.

For that reason, this camera is way better as a film camera than it could ever be as a digital point-and-shoot. Film makes the process easy, thought-free, and fun. Throw in a roll of Kodak Ultramax or Lomo Purple and have fun.

This is not a camera for pixel peepers or people who care more about the quality of images than the memories captured in them.